Just after noon, Company 63 and Mutual Aid were dispatched to the 900 Block of E Orange Street in Lancaster Township for a reported dwelling fire. Manheim Township Fire Rescue – Engine 201, Lancaster City Fire – Engine 3, and Truck 63 all arrived at about the same time to find a small stove top fire. Engine 201 and 64-3 checked for extension while Truck 63’s crew ventilated the structure. The remainder of the units due staged until being released, as they weren’t needed.

Battalion 64-3 (Dommel) and Deputy 63 (Keens) filled the incident command for the assignment.

The company handled a fire alarm soon after returning to quarters with the assistance of Company 62 (Witmer) on Alpha Drive in East Lampeter Township. 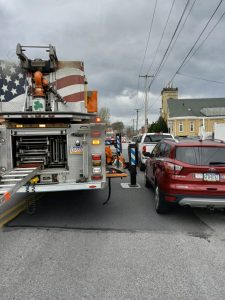