On Saturday, April 23rd a crew from the LFC was invited to our local Grocery Outlet for a friendly game of Supermarket Sweep versus the East Lampeter Township PD.

The rules of the game were modified slightly to accommodate the availability of players. Each team provided one member who was given three (3) minutes to canvas the entire store, filling their cart with the highest-priced items they could find. If the player filled their cart, they were allowed to switch it out with an empty one and keep going. At the end of three minutes, the carts are totaled up and the team with the highest value of groceries won the game. Fire Chief, David Keens, was the runner for the fire department while Officer Mauro took the honors for the police.

In a hard-fought battle, the police department won having amassed a $1200 value to our $778. ELTPD was awarded $500 while the LFC was given $100. The winnings were to be donated to charities of our choosing.

To say the teams had a great time would be an understatement. We can’t thank Heather and Mike from Grocery Outlet enough for organizing the event and for supporting our local emergency services. We are looking forward to a rematch next year! 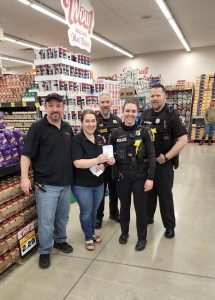 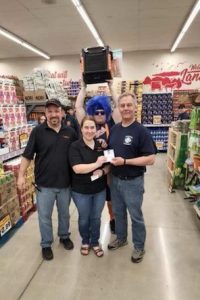