Engine Company #1 was established in 1943 with the formation of the fire company. 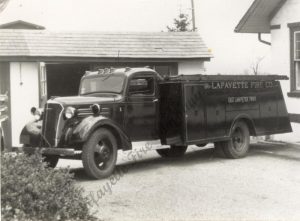 The original Engine 1 was a used 1937 Chevrolet with an internal pump and 600 gallon water tank. This engine was painted red originally but was repainted orange and was designated Engine 2 in 1949

The second vehicle for Engine Company 1 was a 1949 Chevrolet with the body built locally by High Welding. This engine had a 500 GPM Darley Pump but no water tank and was used as a Hose Wagon. This engine served until 1965 and was re-purchased and restored by the fire company in 2005. After the original sale this rig serves the Armstrong World Industries Innovation Center's fire brigade in Lancaster PA 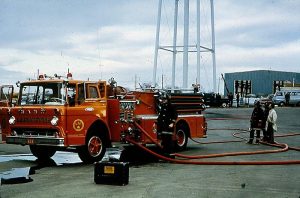 The third vehicle for Engine Company 1 was a 1965 Ford/Hahn purchased new. This engine had a 1000 GPM Hale pump with a 1200 gallon water tank. This unit served an eventful life first as a pumper, then in 1983 Additional ground ladders and equipment were added making this rig into a Quad where it served as the "truck company" until 1986 when it was once again modified to become the foam unit where it served until 2000. This rig was donated to the Wayne County Fire Dept. in Laurel Mississippi. 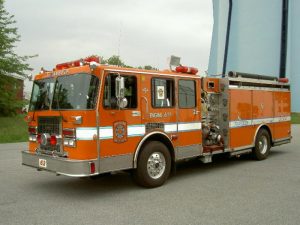 The fourth vehicle for Engine Company 1 was a 1991 Spartan/Saulsbury rescue pumper. This was the first 4 door cab purchased by Lafayette and ran as the rescue engine until 2009. This rig had a 1500 GPM Pump, 600 gallons of water and a 40 gallon foam cell. This rig was replaced by the current 2003 Pierce and sold to the Massie Twp. Fire Dept. in Harveysburg Ohio.

This message is only visible to admins.
Problem displaying Facebook posts. Backup cache in use.
Error: Unsupported get request. Object with ID 'posts' does not exist, cannot be loaded due to missing permissions, or does not support this operation. Please read the Graph API documentation at https://developers.facebook.com/docs/graph-api
Type: GraphMethodException