This Afternoon, Engine 63-1 was dispatched to a Vehicle Accident Standby at the intersection of Lincoln Highway East and Old Philadelphia Pike. The incident was called out by Medic 600 of LEMSA. There initially were no injuries, but later on a patient wished to be checked by EMS.

The unit operated on the scene for about an hour until the crash was cleaned up. 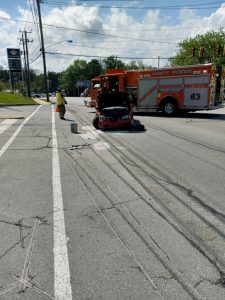